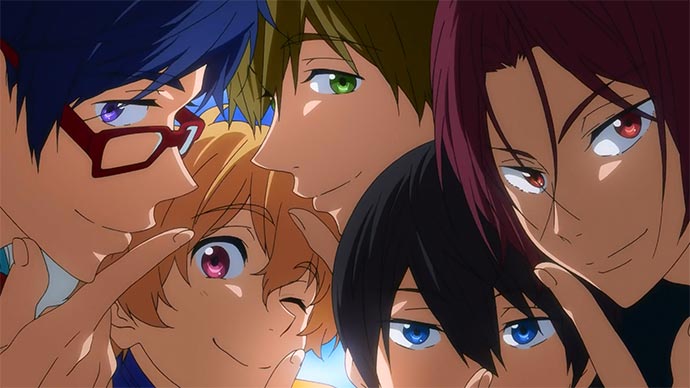 Welcome back, Free! fans. Today’s episode was packed with new characters and plotlines, so I’m just gonna jump right in (see what I did there?).

The second episode of Free! Eternal Summer continued to focus on the future of the team, with Haru and Makoto beginning to prepare for their post-high school lives. Whether it’s filling out career questionnaire forms, or talking to Amakata-sensei about their goals, it’s clear that neither Haru nor Makoto seem to really know what they’re going to do. Haru only wants to swim freestyle, as he writes on his questionnaire form. But if he wants to keep swimming, he’ll likely have to get into the competitive world of professional sports.

“Why can’t I just grow up and become a merman?”

At Samezuka, Rin already knows that he wants to swim competitively, but he remains reluctant about his sudden new leadership position. In order to swim a local relay, Rin throws together a strong, if unpracticed, team, consisting of childhood friend Sousuke, Nitori (whom I like a lot more this season), and Mikoshiba’s perky kid brother, Momotarou.

Sousuke is an interesting guy. From the moment his oft-previewed “fight” with Rin turned out to be an aggressive secret handshake, I was set to love him. He’s super intense (as someone who got scouted by a pro team ought to be), but incredibly friendly to Rin, Nitori, and Momo. But then he turned around and threatened Haru behind Rin’s back. As such, it’s probably safe to assume that Sousuke is a little more two-faced than he initially seemed. I’m not sure what his goals are, or why he would tell Haru to back off of Rin, but I’m intrigued. Sousuke may not be Rin’s version of Makoto after all, but he’s certainly worth keeping an eye on.

Say it with me: “I came out to have a good time and I’m honestly feeling so attacked right now.”

Momo, on the other hand, is an open book. He’s loud, kind of cocky, and girl crazy, just like his older brother. And like his older brother, he immediately falls in love with Gou, hilariously spouting random facts about himself at her as Rin drags him away. Momo is instantly likable, and super adorable. He’ll be a good addition to the Samezuka team. 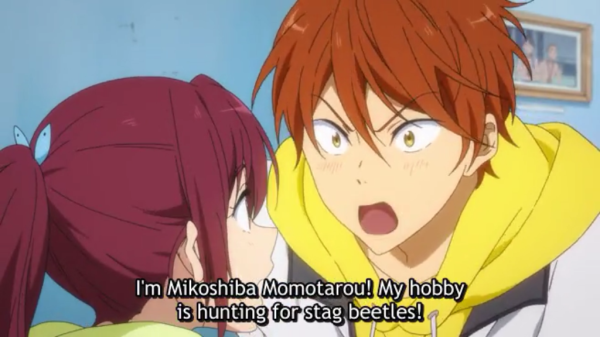 You’re a cute kid, but I’m Team Seijuuro for life.

Rei and Nagisa didn’t feature much this episode, though they had some good moments. I love Rin’s playful quip about biting Rei during the relay, and I think they have the potential to be really good friends if they spend more time together. Nagisa’s lighthearted rivalry with fellow shota Nitori is equally cute. Still, I’d like to see more characterization for Rei and Nagisa in the upcoming episodes. Their plight to recruit new members of the swim team has the potential to go pretty deep into their feelings about being left behind, so I’d like to see more of it.

Gou, as usual, is a delight. Her super serious judging of the muscle contest at Sasabe’s pool event day was hysterical. I haven’t mentioned it before, but Gou’s friendship with the guys is one of my favorite aspects of the show. She’s never treated like “the chick”, or like Rin’s kid sister. She’s a valued friend of theirs, one whom they spend time with even when her manager skills aren’t required.

Overall, the plot has been pretty efficiently set up. Haru, having some kind of inkling that he might need to get more competitive if he wants to keep swimming after high school, has found a new rival in Sousuke. I think their personal rivalry will be the thing that Haru needs to step up his game. Meanwhile, Rin will continue to learn what it is to be a good leader, while staying on the path to pro-swimming.

That’s it for this week. See you next water time!

All images and properties are copyright of Kyoto Animation.

2 thoughts on “Free! Eternal Summer Episode Review: 2×02 “The Stroke of a Chance Encounter””