The Legend of Korra recovers from it’s clip show fiasco with two fantastic, plot-relevant episodes. As Kuvira’s weapon comes closer to completion, Korra is finally able to put her trauma behind her with help from an unlikely source. Meanwhile, the Beifongs pull off a daring rescue with the help of Toph.

“Beyond the Wilds” puts Korra’s troubles to rest at last. After Kuvira’s harvesting of the Banyan Grove Tree spurs the Republic City spirit vines to become hostile, Korra attempts to find a way to free those trapped in the Spirit Wilds, including Jinora. Sick of being written off, Korra seeks to find her way back into the Spirit World and prove herself.

Korra’s experience with PTSD has been a long, hard journey, one that served to give her complex emotional development. As I’ve mentioned before, Korra’s trauma isn’t a plot device to be forgotten about in a few episodes, but an aspect of her that completely transforms her state of being. Even when Korra, helped ironically by Zaheer, overcomes her fear and enters the Spirit World, she doesn’t truly let go of her experience. Instead, she comes to accept it as part of herself. Korra’s problem wasn’t necessarily that she was traumatized, but that she kept trying to find ways to “cure” herself. She has been irrevocably changed, and her acceptance of that is what allows her to move past it. 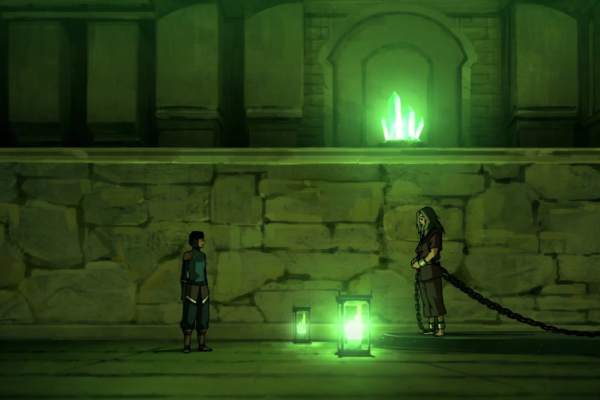 “Come on, Korra! We’ve had some great times!” [footage not found]

Korra’s meeting with Zaheer is a highlight of the episode. Zaheer, for all of his villainy, is truly saddened to learn that Kuvira has taken advantage of what was supposed to be a new found freedom for the Earth Kingdom. And while he never apologizes for what he did, the help he offers Korra is genuine. After all, having spent most of the past three years in the Spirit World, Zaheer is personally affected by the unbalancing caused by Kuvira. Everything Zaheer did is of his own making, but his reaction to learning that the cause his friends and lover died for has been perverted invokes sympathy.

Korra’s emotional climax comes when she reconnects with Raava and frees the spirits of Jinora and the others trapped in the Spirit Wilds. After having been torn down by the last three seasons, it’s nice to see Korra regain some of the things she’s lost. With Raava within reach again, Korra can finally live up to her fullest potential.

Petition to get that design on a blouse.

“Beyond the Wilds” is mostly Korra’s show, but Bolin, Opal, and the world leaders get a bit of time in. Fire Lord Izumi is the most notable participant in the discussion of what to do about Kuvira. When Raiko insists on attacking Kuvira first, Izumi reminds him of the Fire Nation’s unfortunate past with “nonsense wars”. With only a few episodes left, we’ll probably never know Izumi’s true character, but she seems like a prudent, logical woman. Clearly she’s learned from the mistakes of her ancestors.

Bolin is deeply sorry for the time he spent working for Kuvira, but his sincerity isn’t enough for Opal. After some ill-advised attempts to win her back, Bolin proves his love by volunteering to go on a strike mission to save Opal’s family. 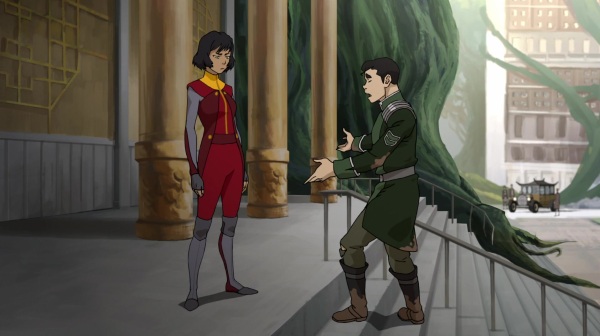 Would you say that Opal and Bolin’s relationship is…on the rocks?

“Operation Beifong” plays out that mission as Lin, Opal, and Bolin team up with Toph to save Suyin, Bataar Sr., and the others. As they work to get their family members out of the suspended, wooden prison (surrounded by Earth!), Kuvira prepares to test her new nuclear spirit vine weapon nearby.

Lin and Toph’s relationship is explored through the rescue mission, with Lin airing her long gestating grievances about her relationship with her mother. During a heated argument, Lin reveals that she’s always resented not knowing her father and how little Toph seems to care about it. Toph’s casual brush-off of Lin’s father (who turned out to just be some dude) is the last bit of drama left unresolved in the Beifong family, and over the course of the episode, Lin comes to forgive her mother for her flaws. She is, as demonstrated in several scenes, so much like Toph that it’s easy to see why they’d be at each other’s throats. Still, it’s clear that the two women love each other, in their way. 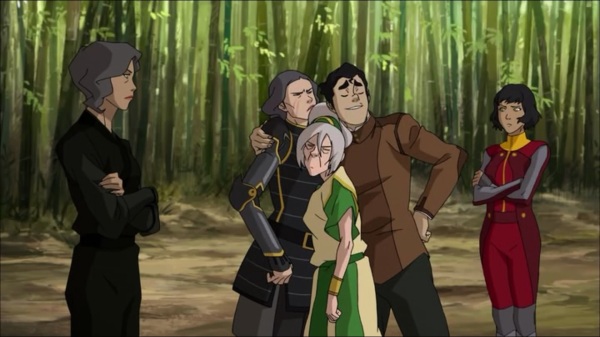 The novelty of family hasn’t yet worn off for Bolin.

Suyin and the rest of the Beifongs are rescued from their wooden prison easily enough, but trouble crops up when Kuvira catches wind that Zhu Li has deliberately sabotaged her powerful new spirit vine cannon seconds before its first test. Zhu Li, a double agent as suspected, is tied up in the empty town being used as cannon fodder. As Opal and Bolin attempt to rescue her before the cannon goes off, the rest of the Beifongs attack Kuvira.

The battle between Kuvira and Suyin is a thrilling one, with both women pulling out all the stops in their brief, but brutal, fight. Suyin’s improvised metal armor makes a comeback as she deftly dodges and resists Kuvira’s signature metal bands. Once it becomes clear that Suyin’s skills aren’t going to hold back an entire army, Toph steps in to orchestrate a truly righteous rescue via Earth avalanche. 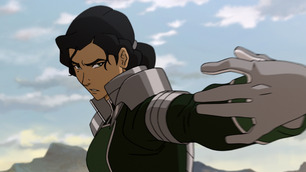 [Insert some kind of joke about in-laws here]

While Kuvira remains as unshakable as ever, even after the Beifongs escape, Bataar Jr. has a notable break in resolve. His test of the cannon nearly kills Opal, something that greatly distresses him. Interestingly, Junior’s relationship with Kuvira has completely been stripped of affection by this point. She noticeably treats him more and more like a subordinate with every passing episode, and with the death of his family members suddenly seeming like a very real possibility, it seems like Junior might not be cut out for dictatorship after all. Whether he betrays Kuvira or not is still a toss-up, but I wouldn’t be surprised if there’s a chance for redemption on the horizon for Junior.

Back in Republic City, Korra tries to convince the spirits of the city to help in its defense after they all start fleeing. The spirits, ever the pacifists, don’t wish to be involved in “human wars”, leaving Korra with a dilemma. I’m sure she’ll find a way to convince them to fight for the city they’ve all come to love, but it may take some effort. The spirits have always kept to themselves before. 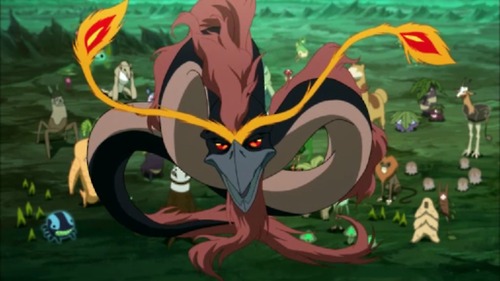 “Hmm, how about this: instead of doing something, we’ll do nothing. How does that sound?”

Though the moment is brief, Prince Wu manages to actually be useful by suggesting Republic City evacuate its citizens just in case they’re attacked. Though his intentions are impure, Prince Wu is ever-so-subtly changing into a more effective human being, if not exactly leader material yet. I’m not sure if Wu will ever be a worthwhile character, but his sudden interest in helping the people could be a step forward. It’s a good thing he came up with the idea to evacuate when he did, since Kuvira evidently plans to attack Republic City in two weeks.

With Korra back in action and an actual planned attack from Kuvira on the horizon, the last pieces of the story are falling into place. War is coming and it should be interesting to watch the chips fall as they will. Toph has more or less resigned from fighting but perhaps some other faces from the past will show up to fight. As I mentioned a few episodes ago, if the development team is so inclined, now would be a great time to bring everyone together for one last hurrah.