This week, I had two episodes of Zankyou no Terror to watch, and it still felt like only ten minutes had gone by before I was finished with them. Zankyou no Terror gains momentum with every new episode even as it savors the more quiet moments. It’s shaping up to be one of my favorite series of the summer.

“Search and Destroy” is a game changer, as Shibasaki officially takes on the Sphinx case and publicly challenges Nine and Twelve. It’s also the first time Nine and Twelve’s bombs are disarmed before they can go off, thanks to Shibasaki’s incredibly convoluted answer to their Oedipus-related riddle.

Shibasaki becomes more interesting with every episode. His mention of his lonely childhood in Hiroshima gives his involvement in the potentially nuclear Sphinx case a personal meaning. And while he obviously has very noble reasons for joining the investigation, the thrill of the chase and the opportunity to flex his brilliant mind seems to be a pretty big draw as well. He has the potential to become the Sherlock to Nine’s Moriarty. 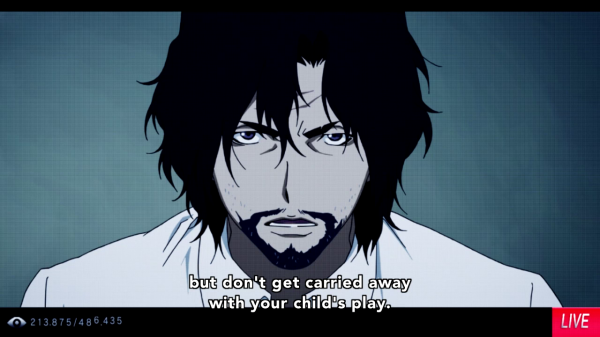 “Kids today, with their texting and bombs.”

Nine’s flashback to his and Twelve’s childhood reveals more about the kinds of conditions they grew up in. It looks like they were both held in some kind of experimental facility and raised without emotional attachments. What’s especially intriguing is the little white-haired girl who was there with them. She has to be the woman from the promotional posters and the opening sequence. It’ll be interesting to see how she fits into the story and whose side she’s on.

While the First Investigation Division attempts to solve Nine and Twelve’s riddle, Lisa decides she’s had enough of her mother (and presumably her school) and runs away. There isn’t much of Lisa in “Search and Destroy” but it becomes pretty clear that she hopes to find Nine and Twelve. Depictions of Lisa’s unstable mother and bullying classmates make it all the more heartbreaking that the only place Lisa feels like she can be safe is with the terrorist cell that’s threatening her to stay quiet.

“Break Through” introduces a different kind of bomb altogether. Stirred up by Shibasaki’s public scolding, Nine and Twelve set up a bomb with a password to shut it off. After racking his brain for anything related to Oedipus, Shibasaki finally comes to the conclusion that the password is his own name. However, because the First Investigation Division sent people to disarm the bomb, the password didn’t work and the bomb went off. Except this time around, it was an information bomb, one that spread the contents of the investigation all over the internet.

One of the reasons I’m so impressed by Zankyou no Terror is because it uses modern, recognizable technology as part of the dramatic effect of the acts of terror. Nine and Twelve can frequently be seen using Apple computers, and they buy a lot of their materials off Amazon. People watch the videos on their smart phones, and Twelve uses his own to track Lisa’s movements. The use of technology makes everything feel incredibly real, and the idea of a mass information leak is not only a real life possibility, it’s something we’ve already experienced.

Y’all have no idea.

One thing I find strange is that Nine and Twelve leave a pretty obvious paper trail behind them. Though they do a fantastic job of hiding their identities, they leave video recordings and purchase histories behind. For people who can pretty easily hack into police databases, it seems sloppy of them to leave such evidence. It makes me wonder if they’re doing it on purpose. Their reaction to the revelation that the First Investigation Division has connected Sphinx to the stolen plutonium is just ambiguous enough that it’s difficult to tell if they’re concerned or not.

While Nine and Twelve set up their information bomb, Shibasaki goes to Aomori and questions a nuclear plant worker about Nine’s previous employment. Neither he nor anyone else in town remember anything of note about him, which is no doubt to Nine’s credit. I continue to wonder just how old Nine and Twelve are supposed to be, as a teenager would look pretty out of place at a nuclear facility, forged documents or not.

Lisa gets a lot more screen time in “Break Through”, as she’s more or less officially inducted into the group. While she spends the majority of the episode wandering through Shibuya and sleeping on stoops, she’s rescued from concerned police from Twelve after expressing her despair that he didn’t whisk her away from her miserable life sooner. It’s here that a change occurs in Lisa, as she’s so relieved to be away that she throws her lot in with Sphinx, giddily asking if they’re going to destroy the world. 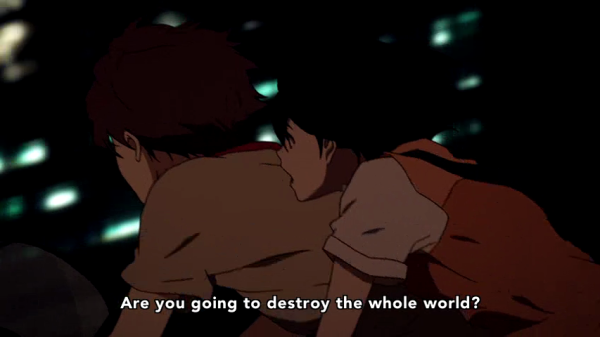 “Screw this, I’m taking up villainy!”

With the disarming of one bomb and the detonating of an information bomb, Zankyou no Terror is becoming more and more urgent with every episode. While the show still has an air of quietness to it overall, the thrills come more from the character motivations than the actual bombs. There are lots of questions, especially pertaining to Nine and Twelve’s past and their relationship with the white-haired girl. I’m looking forward to the mysteries being solved in future episodes.