Today’s Teen Wolf was action packed, establishing the antagonists of the season a little more solidly while also featuring a transformation that’ll likely effect the rest of the series. Move over, Scott. There’s a tiny new Teen Wolf© in town! 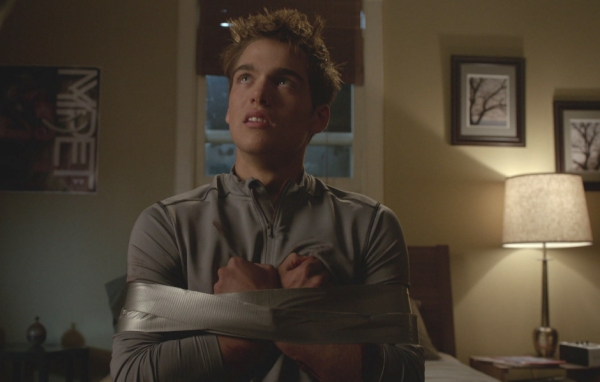 When we last left Scott, he’d just bit Liam out of necessity. Instead of doing the smart thing and telling a trusted authority figure about it, Scott panics and kidnaps Liam, calling Stiles to come and help him. It reminds me of the time they kidnapped Jackson, way back in the second season. Fond memories. The new beta doesn’t quite catch on to Scott’s vague descriptions of what’s happening, and spends the majority of the episode being intensely confused about his transformation. Liam is a pint-sized ball of anger, having been kicked out of his school for vandalism. In fact, he seems to have more troubles beyond his impending lycanthropy. Scott, with the help of Chris Argent, gets through to him, but he’s got a long journey ahead of him.

While Scott deals with his new beta, The Sheriff, Deputy Parrish, and Derek gather around to solve the mystery of The Mute. He’d conveniently left behind his ax and speaking keyboard at Derek’s apartment when he came and tried to murder Peter. The trio hacks into the keyboard and deduces that The Mute is a supernatural hit-man. Clearly, he’s not a great one, seeing as how he left all his equipment lying around. Despite what I predicted last week, it seems that The Mute might not actually be the main antagonist after all. In fact, he’s probably dead. I don’t think anyone, supernatural or otherwise, could survive what Peter did to him. That’s what happens when you thoughtlessly bury axes in people’s chests. Of course, there’s no body, so who knows. People don’t often stay dead in Beacon Hills.

My fantasy threesome…of cops on a case!

Malia is all set to spend the full moon tied up at Lydia’s lake house, and the gang decides to use the opportunity to get Liam down there for a proper werewolf intervention. Plans go array when he texts all his friends about the so-called party that’s happening at the lake house. Lydia is forced to entertain a bunch of teens while the others look after Liam and Malia. While everyone else is dealing with their respective shapeshifters, Lydia goes full on banshee, eventually gleaning the code she needs to decipher her “math notes”. What she discovers is a list of supernatural creatures in Beacon Hills, and they’re all marked for death.

“The Benefactor” revealed a little bit more information about the main antagonist, who still remains unseen. Previously introduced Garrett and his girlfriend Violet are not as innocent as they seem, having murdered an innocent werewolf beer delivery guy for cash. They’re working for the Benefactor, presumably in the same capacity as The Mute. Mason, on the other hand, seems awesome. Even if he is a Danny clone. 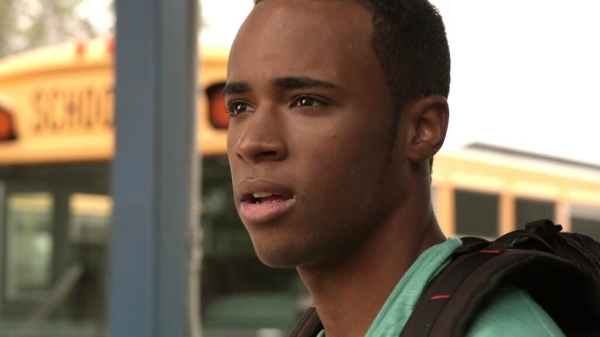 Hi, are you here to fill the recently vacated position of Gay Person of Color Best Friend with Athletic Skills and a Likable Personality?

Malia learns a little bit about control this week, being on the receiving end of a pep talk from Stiles as she fruitlessly tries to rip him apart through her chains. It’s sweet, I guess, that Stiles trusts her enough to untie her. Still, I’d like to see them both interact in meaningful ways with people who aren’t each other. I feel like I don’t really know who Malia is as a character, and Stiles isn’t really getting the post-possession characterization he needs.

One of the biggest mysteries on this show has to be Deputy Parrish. He seems like he should be in the know, but he remains on the fringes of the group. I’m almost certain he’s supernatural, or else just really chill about things like “teenage cannibals”.

It’s great to see Chris again, though it’s weird to see him without Allison around too. I also can’t help but wonder what happened to Isaac. Did he go to France with Chris, and if so, did Chris just leave him there? And for that matter, did Danny decide to leave Beacon Hills? Is Teen Wolf aware that it’s possible to have more than one LGBT character on the show at a time?

There hasn’t been much talk about Kate, The Berserkers or the stolen money since “117” and I hope that’s going to change soon. Teen Wolf has never been one for continuity, but they need to make a few connections sooner or later. Maybe the Benefactor is paying his hit squad in bearer bonds. Also, now that Scott has turned an innocent, will the Calaveras come after him as promised? Get your plot together Teen Wolf! You’re already four episodes in.

What’d you think of the episode? Are you liking the Benefactor plot? Do you think something’s up with Deputy Parrish? Are you happy to see Chris again? Sound off in the comments.

One thought on “Teen Wolf Episode Review: 4×04 “The Benefactor””