Last night’s Teen Wolf was all about a return to roots. That meant reestablishing lovelorn Scott (albeit with a new love interest), introducing a little Jackson-lookalike, and most importantly, bringing back lacrosse. Welcome back, lacrosse!

“Muted” saw the introduction of who I’m assuming is this season’s main antagonist, a scary mouthless dude with an ax. He acquaints himself with the audience by slaughtering some kid’s family which, coincidentally, is my number one nightmare scenario. Of course, since that kid turned out to be a Wendigo with a meat locker full of people in his basement, there’s probably more to “The Mute” than just a crazy guy who kills for kicks.

Elsewhere, the Beacon Hills gang suddenly remembered that they do things like go to school and play sports. With lacrosse season upon them (what is the timeline on this show?!), Scott and Stiles attempt to retake their respective positions on the team, but a new challenger appears in the form of a talented freshman. This new kid, Liam, is a mini-Jackson, albeit nicer. He’s skilled, good-looking, and a little cocky. Scott and Stiles immediately suspect him of being supernatural. He isn’t, of course, at least until Scott prevents him from falling off a building with his teeth. Y’know, the teeth that turn people into werewolves. 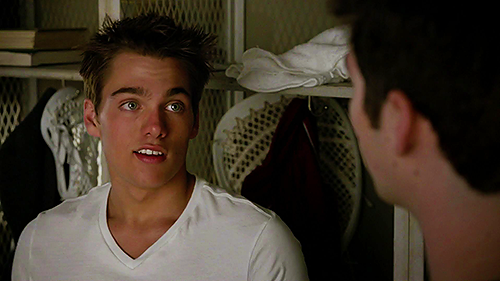 “You’re freakishly attractive for a freshman, are you a werewolf or something?”

But not every aspect of Scott’s life is lacrosse and accidentally making betas. After half an episode of awkwardness and self-doubt, Scott finally gives adorkable Kira a proper kiss, though her parent’s desire to move will undoubtedly throw a monkey wrench into their progressing relationship.

Over at the Hale apartment, Derek hires Braeden to track down Kate. There seems to be something going on between Derek and Braeden, which seems weird to me, because hasn’t Derek had enough of morally questionable love interests? But I like Braeden a lot, so I hope this works out better than Derek’s last two relationships. For Braeden’s sake.

Speaking of people I didn’t expect to see hanging out, Lydia found herself sleuthing around with none other than light-of-my-life, Deputy Parrish. I fear for the angelic lawman’s life in every scene he’s in, but it would be incredibly interesting if he got pulled into the supernatural fray. I can’t imagine finding a freezer full of corpses put his suspicions about the town at ease.

My main gripe this episode lied with Malia. Her storyline revolved around her struggle to understand her schoolwork, and her general social ignorance. While there were some cute moments ( her mimicking Kira’s reactions to the lacrosse game), it all pointed to the glaringly obvious plot hole that is her character. There’s absolutely no way a child who has lived in the woods by herself for most of her life would be dropped into 11th grade just like that. Maybe I would be more likely to look the other way if they at least had her in special classes, instead of being tormented by teachers who, realistically, should be aware of her developmental issues. 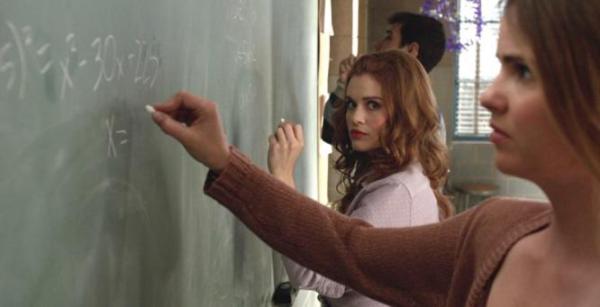 You mean there weren’t any pre-calculus textbooks lying around in the woods?

Malia’s relationship with Stiles continues to creep me out, though I guess I’m going to have to get used to it. It’s just hard to ignore the inherent power imbalance between them, with Stiles acting like her caretaker more than her boyfriend.

It’s good to see Kira getting more focus. Other than Lydia, she’s the female lead, and she deserves more characterization than she’s got at this point. I think her parent’s moving situation will provide some drama, but it’ll be nice to get to see her do things outside of kiss Scott and swing her sword. Things like play lacrosse, maybe?

The inclusion of wendigos is pretty cool, but I do hope they keep the lore tight this time around. I think Seasons 3A and 3B were too convoluted, which in turn, diminished their quality. We’ve come a long way since Peter Hale killed some people in the woods, but I think a return to a singular threat would be wise.

Ultimately, I think it’s a good decision to go back to what made Teen Wolf great in the first place. If they keep the story tight, reestablish some old dynamics while forging a few new ones, and keep scaring the pants off their audience (seriously, The Mute is the scariest), then I think Teen Wolf will continue to thrive.