The Legend of Korra has hit midseason, which means there’s a lot of housekeeping to do before the final confrontation. “The Battle of Zaofu” swiftly ends the Zaofu conflict and paves the way for a more serious face-off between Kuvira’s army and Korra and her allies. “Reunion” is a bit less relevant, but does the important work of reuniting Korra with her loved ones. With almost everyone back together, Korra can start working on the problem of Kuvira in earnest.

“The Battle of Zaofu” brings about the first violent confrontation between Korra and Kuvira. After Suyin’s infiltration plan ends in predictable failure, Korra agrees to meet with Kuvira with the intent of re-negotiating a truce of some sort, even as Opal and Jinora advise her to attack. Unfortunately, neither side can agree to the other’s terms, resulting in an old fashioned duel between Korra and Kuvira. 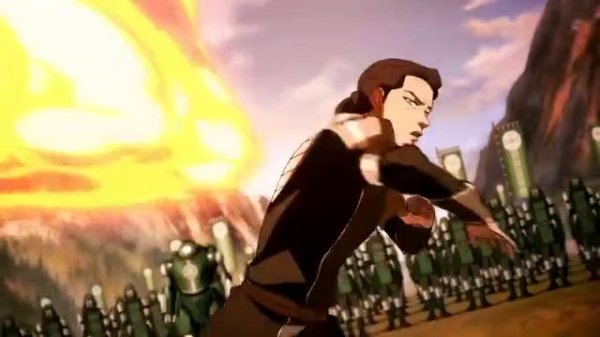 “She struck at me first, you all saw it!”

Kuvira, before taking on Korra, turns to her army and explains to them that she’d never ask them to do anything she herself would not do. It’s a defining moment for Kuvira, who is absolutely confident that she is in the right. Kuvira truly believes, much like Korra before her crumbling of confidence, that she is a force of good in an unbalanced, broken world. Her reasonable appearance inspires confidence in her supporters, and as such, she’s able to take on Korra while making it look as though she has no other choice.

Kuvira’s curb-stomp battle with Korra results in the reappearance of Anti-Korra, causing her to falter just as she finally gains the upper hand. Despite getting the poison out of her system, Korra’s recovery isn’t quite complete. As in real life, recovery doesn’t happen overnight, and I’m glad the removal of the poison didn’t just magically fix everything. Korra may be physically lighter without the metal holding her back, but her fear still weighs heavily on her mind. Kuvira is the antagonist of the season, but Anti-Korra is Korra’s biggest adversary.

“Bet you thought you’d seen the last of me!”

Elsewhere, Bolin and Varrick stage their own suicide. Varrick rigs his newly rebuilt spirit vine bomb to explode, forcing Bataar Jr. and the others to disconnect the lab from the rest of the train and escape before it explodes. Varrick, despondent without Zhu Li (who seems just cautious enough in her dealings with Kuvira to be a double agent), actually seems poised to explode, but Bolin buries them both in the mountainside to avoid the blast. Free from Kuvira, Bolin and Varrick make plans to spread the news of her true intentions.

With Korra’s defeat comes the defeat of Zaofu. Kuvira and Junior imprison the Beifong family, who refuse to bend to their will. As they’re taken away, Bataar Sr. expresses his total disappointment in his son. Though Junior himself is a sniveling, Percy Weasley type, I’m interested in the direction his family drama is headed. Junior seems too far gone for redemption, but a heel-face-turn isn’t entirely impossible. Similar to Asami’s dealings with her traitorous father, Junior may not be beyond redemption if his family sees fit to forgive him.

“Reunion” takes a break after Korra’s humiliating defeat to reunite her with Mako and Asami. While the episode lacks the plot significance of “The Battle of Zaofu”, it serves to bring most of the players together for a more serious confrontation with Kuvira.

The highlight of “Reunion” is the reunion between Korra and Asami. Their relationship was one of the most endearing things about Book 3, and their rapport is equally so here. Korra’s relationship with Asami is on a level different from that of Mako or Bolin, something that causes dissent between the reconnecting friends when Mako finds out that Korra has been writing to Asami and not him. 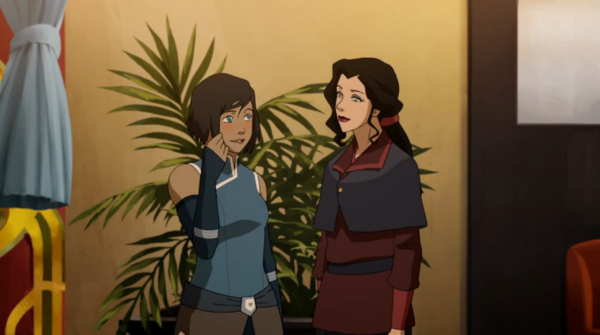 “Hey so, you wanna ditch Mako and get out of here?”

To make the tension filled reunion even worse, Mako drags along Prince Wu, who winds up kidnapped as soon as he leaves Mako’s sight (it seems like you really can’t leave him alone to pee, Mako). Wu’s kidnap doesn’t exactly endear me any more to the idiotic prince, but it does serve as a way for Asami, Mako, and Korra to get their collective groove back. Three years is a long time, after all, and it’s not surprising that the three friends may have some adjusting to do.

While Korra, Asami, and Mako reconnect, Bolin and Varrick run into trouble when they encounter a group of Earth Kingdom fugitives. Made up of a group of fire and water benders (one of whom is voiced by Amon himself, Steve Blum), the fugitives bring about an interesting perspective concerning Kuvira’s operations. Their immigrant status is seen as undesirable, and as such, they were imprisoned. Kuvira’s cause has already been darkened by her “reeductation camps”, but her imprisonment of non-natives is as disturbing. It’s also the first time there’s really been any true Fire Nation or Water Tribe perspective on the situation. With Zuko, Fire Lord Izumi, Desna and Eska, and Tonraq being strangely quiet about the issue, the anger of these fugitives about being taken from their own homes because of their nationality is the only evidence of opposition there. Perhaps if the other nations were to know that members of their own are being tormented just as the Earth Kingdom citizens are, they’d be more proactive in dealing with the situation. 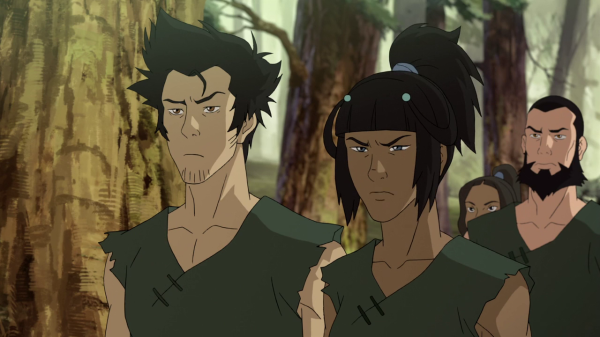 Bolin proves his leadership skills by pulling a classic “Fugitive Transfer” ploy on the Earth Kingdom border patrol, which nearly succeeds. The resulting chaos creates a situation for Bolin to show off his considerably impressive lavabending skills, as well as for Varrick to take his scientific skills to destructive extremes. Their skills combined with that of the fugitives makes way for their escape and, presumably, return to Korra’s side.

With “The Battle of Zaofu” and “Reunion”, Korra gets ready to launch into the second half of the season. Things will likely get more serious now that Zaofu is overtaken, with a full scale battle between Korra and her allies and Kuvira’s army likely on the horizon. Notably, Kuvira has unknowingly brought her army to Toph’s front door with her harvesting of the Banyan-Grove tree. Toph may have to endure the company of other people to face her biggest challenge yet. At the very least, a reunion with her daughters could be memorable.

You picked the wrong swamp, folks.

This is Korra‘s last season, which leaves me hopeful that all manner of characters could turn out for the final half. Keeping the plot tight is important, but it’d be nice to bring back some of the lesser seen characters. General Iroh, for example. After all, Korra needs to provide closure as much as it needs to provide a conclusion to the plot. If this is truly our last hurrah with these characters, I’d like to see as many of them as makes sense. And with a battle potentially imminent, what better way to squeeze some appearances in from characters we haven’t seen in a while? At the very least, give Opal and Kai something to do.