Free! Eternal Summer continues it’s transition into more serious territory when some exciting opportunities for Rin and Haruka pop up. The future is no longer a vague notion, but a present issue that must be dealt with. While Rin knows exactly what path he’d like to take, Haruka will have to really think about where he wants to his life to go from here.

“The Crouching Start of Vindication” covers the long-awaited preliminary relay medley. Despite Iwatobi’s strong performances in the single events, the relay goes awry for them from the very beginning, and not even Haruka can save it. Samezuka ends up winning, though both teams qualify for Regionals. 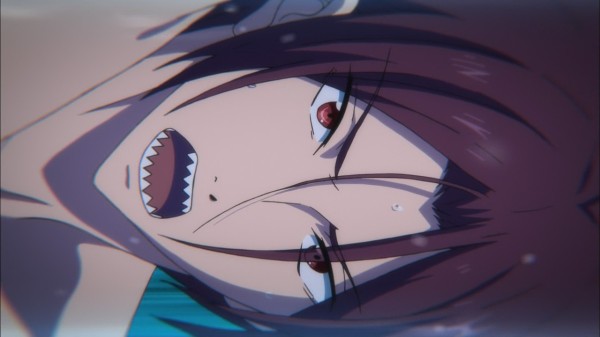 One thing I love about Free! is that they’re realistic about the skillsets of the characters. Samezuka is more likely to win at a lot of the events because they’re altogether better trained and more skilled than Iwatobi. The members of Iwatobi may have enthusiasm on their side, but Rei is a complete novice, and only Haruka is really a professional grade swimmer. At the end of the day, it doesn’t make a lot of sense for Iwatobi to win at the team relay with such an inconsistent group of swimmers.

After preliminaries, Haruka finds out that he’s been scouted, and his apathetic reaction is frustrating to say the least. I think there’s going to come a moment in which Haruka gets slapped in the face with reality and I hope it’s soon. Whether or not he’s interested in swimming professionally (and I think he is, deep down), he’s going to have to figure out what he wants to do when he graduates, and “being free” is not a valid option. Rei says it as gently as he can when he reminds Haruka that “free” isn’t an occupation, but a state of being. His speech about how remaining true to yourself makes you free is touching, and it looks like it may have sparked a thought process in Haru. But he’s got to think fast, lest he squander the opportunities that are dropping into his lap.

Haruka may still be confused, but Makoto is clearly considering his own future. He contemplates going to a local university, which is more-or-less what I expected of him. I do wish he had some kind of secret dream or something, if only to give him a better sense of individuality. 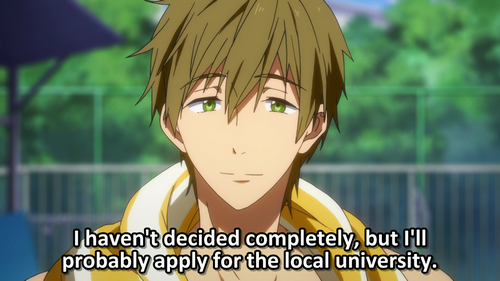 Maybe take a geography class while you’re there.

At Samezuka, Rin and Sousuke have an argument about swimming. Admittedly, I’m confused about what exactly the issue is, but it seems like Sousuke didn’t receive the clarity he was hoping for in the relay. His attitude prompts Rin to react viciously, which makes me further question whether Sousuke and Rin are good influences on each other. For all their happy memories of the past, it’s becoming apparent that they’re not really on the same wavelength anymore.

I think Sousuke’s problem is that he doesn’t understand why he swims. He looks at Rin’s new outlook on swimming and thinks there’s something wrong with that free style, and with Haruka for opening Rin’s eyes. But he expresses that he definitely wants to keep swimming, so he’s not completely hopeless. And his pep-talk to Nitori (who, in true “notice me sempai” fashion, is crushed about no longer being able to swim with Rin) feels genuine and sweet, so he’s clearly not beyond empathy.

One of Eternal Summer‘s big themes is changing friendships, and I think that’s apparent in Sousuke and Rin’s relationship, as well as Makoto and Haruka’s. It doesn’t necessarily mean that their respective friendships are dissolving. High school graduation is a bittersweet time in a person’s life, and Eternal Summer is doing an excellent job of showing the confusion and heartache that comes with the realization that everyone goes down their own paths after high school. It’ll be interesting to see how their relationships have changed by the end of the series. 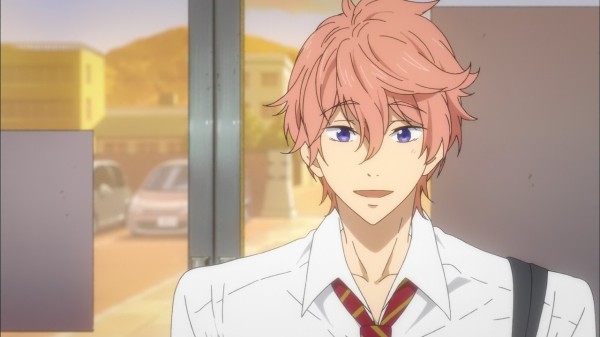 Next week’s episode will introduce Kisumi Shigino, another character from High Speed!. It’s not clear whether his role will be substantial or just one-off, but I imagine his appearance will be a game changer for someone.

See you next water time!

Images are copyright of Kyoto Animation.