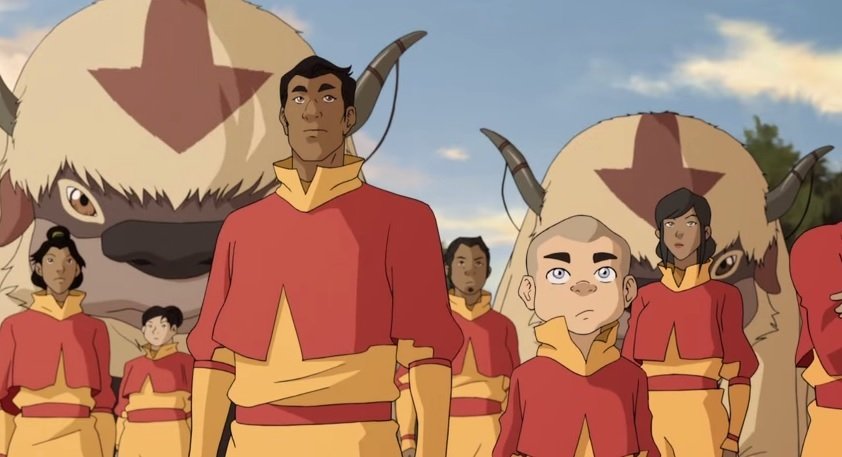 The Legend of Korra returned with two new episodes this week. While they’re mostly episodic in nature, they continue to develop in a much smoother way than previous seasons.

“Old Wounds” explores Lin and Suyin’s past, giving some much needed insight into Lin’s personality. The relationship between the sisters is depicted as being very complex. I half expected a revelation that either Su or Lin had done something completely unforgivable, but their past was a lot more complicated. There was no one thing that shattered their relationship. It was a lifetime of loose parenting, pressure to live up to their famous mother’s standards, and clashing personalities. Ultimately, their present conflict stems from Lin’s inability to believe that the formerly delinquent Su has changed. But after some effective acupuncture and a sisterly knock down drag out fight, Lin and Su start on the path to healing. Once again, I’m impressed that Korra didn’t magically clear up all of the issues between Su and Lin. They don’t tearfully apologize and embrace. They cordially shake hands, a gesture that feels formal, but optimistic. 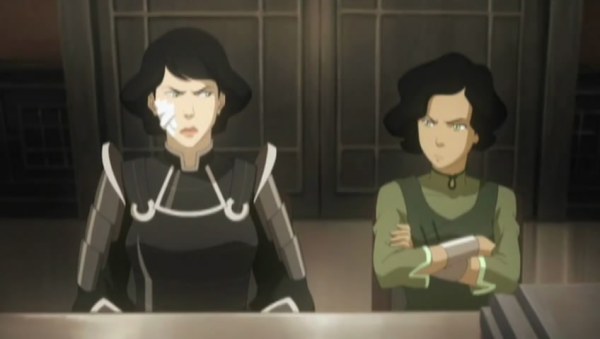 I know this is a serious situation, but they are both just too cute.

While Su and Lin work out their issues, Korra learns to metalbend. Though the Avatar picks it up easily, Bolin dithers at the idea of learning himself. There is a fantastic moment where Bolin tells Opal that Toph is his childhood hero. The audience knew the original Team Avatar so personally, sometimes it’s nice to hear about them from the perspective of a character completely unrelated to them in any way.

Opal’s personality shines through a little more this episode. Both her intervention in Su and Lin’s fight and her decision to go train with Tenzin continue the implication of a strong personality buried beneath the sweetness. Helped by her natural aptitude for airbending, she’ll likely become quite the master.

Back in Republic City, Zaheer and his gang jack a car in order to start making their way to the Avatar, putting their apparent plans to murder President Raiko on hold. It’s hard to dislike these villains when they’re all so insanely cool. I can’t wait to see the epic fight between Korra and them. 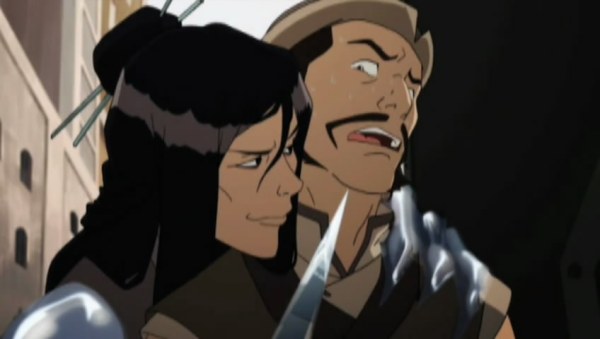 I love that the armless woman is the one who does all the dirty work.

“Original Airbenders” deals with Tenzin’s attempts to train the new airbenders in the ways of the air nomad. When both boring lectures and harsh drill sargeant tactics fail to pump enthusiasm into the recruits, Tenzin realizes that compassion and balance is what’s needed. Tenzin’s arc this season has been about leadership, and it’s progressing nicely. While it may have been easy enough for Tenzin to train his children or his father’s successor, training an entire group of people is something else entirely.

Bumi got a chance to show off his strengths. His rallying speech to the airbenders acts as a demonstration of his oft-spoke of military skills. While he often acts childish, it comes from a place of jealousy, a trait left over from his father’s preferential treatment of his airbending sibling. By the end of the episode he’s brought together the new airbenders, and even begun to feel like one himself.

Jinora got a little rebellious, running off with Kai while her dad was training. I like the idea of Jinora being old and experienced enough to get her tattoos, and I hope she does so soon. I do wish they would stop putting her in damsel situations. Her spiritual powers are really helpful, but shouldn’t a high level airbender be able to blow themselves out of a net?

While I assumed that Kai would get Jinora into trouble out of a sense of selfishness (like he did with Mako and Bolin back in Ba Sing Se), I was happy to see that he genuinely cares for her. His interactions with the baby bison are cute too. I wasn’t expecting a kid who considers himself to be cool and tough to melt over baby animals.

Truly, this place is a paradise.

Speaking of, I feel like you have the be the most monstrous human being in the Avatar world to poach and/or eat flying bison. The Earth Queen is way more evil than I thought.

The Legend of Korra has been really on point so far this season, and I hope it can keep the momentum going. I get the feeling there’s a pretty big arc right around the corner, and I can’t wait to see what happens with Korra and Zaheer’s gang.