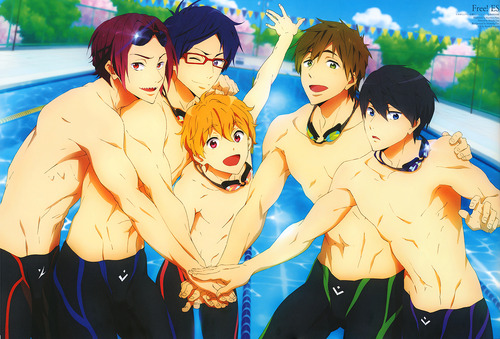 Welcome back Free! This time last year, I watched the final episode of season one and chose to believe that, as promised, I’d “see you next summer”. Well, you came through, and you brought some new characters, new challenges, and new relationship dynamics. Come on in folks; the water is fine.

The first episode of Free! Eternal Summer introduced some big changes in the lives of our finely toned heroes. Haruka, Makoto, and Rin have entered their last year of high school, with Rin reluctantly inheriting leadership of the Samezuka swim team from dearly departing Captain Mikoshiba. 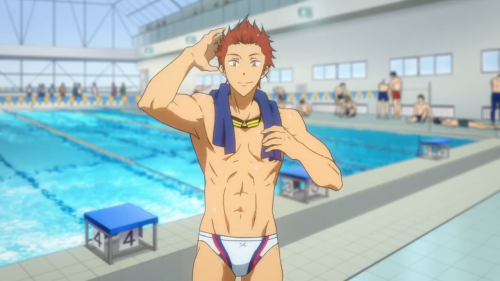 I must go, my planet needs me.

Meanwhile, Nagisa, Rei, and Gou are worrying about recruiting more members for the swim team in anticipation of losing their official club status after Haru and Makoto leave. With the main trio’s time at high school soon to come to an end, everyone is having to consider their future.

But not every change is a sad one. We got to see our first glimpses of some of the new characters being introduced. First is Sousuke, a primary school friend of Rin’s who’s transferred to Samezuka to – what else – join the swim team. It’s pretty unclear where the two former pals stand, but based on the opening and ending sequences, their relationship will be friendly. Also seen in the opening, but not formally introduced yet, is a new recruit to the Samezuka team who looks remarkably like Mikoshiba. Given that the former captain hinted that a “formidable” new person would be joining the team, it’s likely that the mystery boy is Mikoshiba’s little brother. 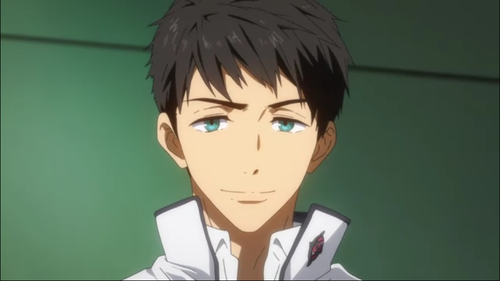 A new hottie has appeared!

It wasn’t just the new characters who received focus, though. The much beloved supporting characters got their share of attention too. Gou attempted to recruit more members to the swim club in the only way she knew how: by displaying the guys like pieces of meat at the club recruitment assembly. It was a valiant effort, but it mostly seemed to disturb the students more than anything. Meanwhile, Ama-chan and Sasabe came to cheer on the guys at their first tournament of the year. Sasabe, who recently got back into the swimming club business, even participated himself.

It’s good to see the evolution of the relationship with Haruka and Rin, whose dynamic is my personal favorite of the show. Their misery at being apart has dissipated, and they seem to have settled into an affectionate friendship, with each of them pushing the other to succeed. Makoto, as Haruka’s source of stability, is as reliable as ever, and Nagisa and Rei are still joined at the hip. 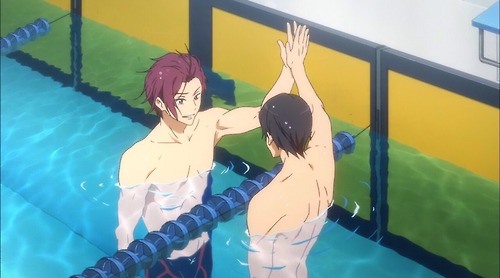 Can we just stay like this for a minute?

Speaking of Makoto, his admittance that he doesn’t know what he wants to do with his life was quite unexpected. He’s never expressed his life ambitions outside of taking care of Haruka, but I assumed that was only because the narrative doesn’t often focus on his character outside of his relation to Haru. To learn that Makoto really is as aimless as he seems is intriguing. I hope the narrative reveals more about that particular inner struggle. He could benefit from the characterization.

Overall, it was a fantastic first episode. They’ve successfully established that there will be changes, both in the plot and the relationships between the characters. But the things that make Free! a really fun show are still there, and I can’t wait to see more.

See you next water time!

All images and properties are copyright of Kyoto Animation.