Sailor Moon Crystal shows its hand with the revelation of Usagi’s former life and the significance of her relationship with Mamoru. With several heart-wrenching moments and some gorgeously animated key scenes, “Serenity” makes for one of Crystal‘s better episodes.

“Serenity” begins where “Minako” left off, with Tuxedo Mask taking the hit for Sailor Moon. Upon realizing that her beloved Mamoru may have just died to save her, Usagi experiences a freak-out of epic proportions. Her despair is so powerful, it triggers a beautifully animated transformation into Princess Serenity. 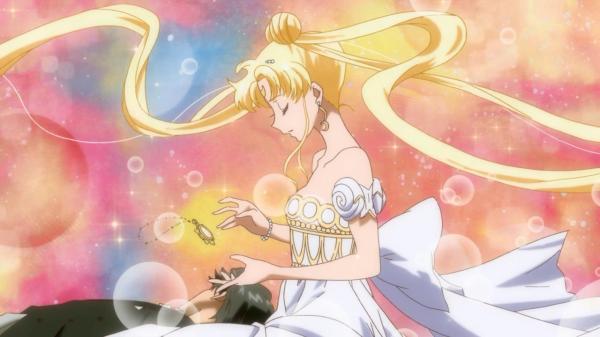 Why can’t it be like this all the time, Toei?

The reveal that Usagi was formerly Princess Serenity doesn’t come as a shock. Her unusual hairstyle is pretty much a dead giveaway (for that matter, I’ll never understand why people don’t notice that Sailor Moon and Usagi are the same person). What’s important about her transformation is that it restores her memories of her past life. Serenity and her love, Endymion, were engaging in a forbidden romance when war broke out between Earth and Earth’s Moon. The implications of the war – that it was caused by Queen Metallia, the same shifty evil that Queen Beryl reports to, and that it was Beryl herself who killed Endymion – go a long way in connecting the past events with the current ones. Serenity and Endymion’s romance, seen only briefly, does its part in making Usagi and Mamoru’s romance more meaningful. It’s a little weird to fall in passionate love with a guy you’ve only known for a very short time, but not if he’s your magical soul mate from your past life.

Usagi’s transformation also reveals that the Legendary Silver Crystal has been within her all along. The reveal of the Crystal is one of “Serenity”‘s most beautiful moments, as its pure energy causes flowers to bloom all over the city. The Crystal transfers its energy to Mamoru, possibly saving him, though he’s kidnapped by Kunzite seconds later. With the power of the Crystal evidently in Mamoru, Usagi is left with a useless glass bead. 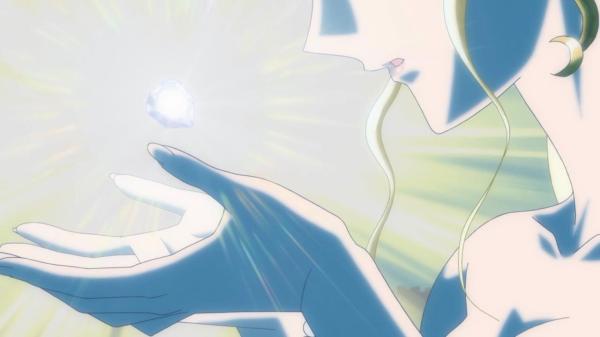 In the Dark Kingdom, the Shittenou vaguely recognize Mamoru, a hint at their involvement in his past. The circumstances of Jadeite, Nephrite, Zoicite, and Kunzite are Crystal‘s one big change from the manga, demonstrated here by their continued existence. Being spared by Crystal‘s adaptation is a fantastic way to not only give them a bit more characterization than their manga counterparts, but to avoid killing them only to resurrect them.

Usagi’s struggle to deal with what happened to Mamoru is detailed in the second half of the episode. Completely overwhelmed by his disappearance and the tragic memories of her past, Usagi falls into a state of depression, at one point even having a legitimate panic attack. Her new love is gone, her past life ended in death, and her former identity seems to be trying to override her current identity. It’s a lot for Usagi to handle, and it’s only with the help of Ami, Rei, Makoto, and Minako that she manages to put herself back together long enough to try and find answers for what’s happening. Luna suggests a field trip to the Moon, and with a goal in place, Usagi steels herself. Her resolve to not be a “tragic princess” is a pretty powerful moment, and I hope Crystal sticks with it. I understand why Usagi has had such a hard time with being Sailor Moon thus far, but I’d love to see her actually level up into a capable heroine. 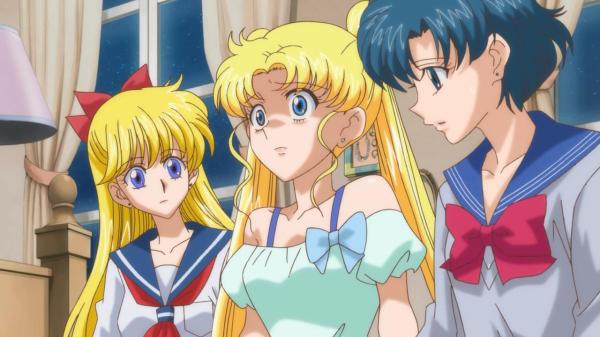 I cried, and my tears were Legendary Silver Crystals.

So far, Crystal has been pretty steadily running through the manga narrative, which has its pros and cons. Crystal‘s adaptation is a much tighter story than Sailor Moon‘s previous anime adaptation. But the lack of characterization for the other Senshi is really starting to become apparent. Ami, Rei, Makoto, and Minako’s devotion to Usagi is super sweet and one of the show’s highlights, but I can’t help but think a little filler might help to diversify them. At the very least, slowing the pace down to include a few extra scenes of the Senshi acting like normal friends might do wonders to convince the audience of their bond. Essentially, I think there could be a little more show, a little less tell.

Overall, “Serenity” is a great episode. Usagi’s sadness and anxiety feels real, and the reveal of her past life gives the current plot some much needed context. I’ve got concerns with the series as a whole, and I’ll never accept the mediocrity of the animation, especially when Toei shows what they can do with scenes like Usagi’s transformation into Serenity. But, if this is the way Crystal will be from now on, I can live with it. We’re getting to the meat of the arc, and I can’t wait to see what happens when the Senshi go to the Moon. It should make for a fun field trip, if nothing else.

Images are copyright of Naoko Takeuchi, Toei Animation, and Kodansha.