Sailor Moon Crystal continues it’s one-chapter-per-episode format with “Masquerade Dance Party”, with one pretty major change. Though they’ll probably continue with their current pace, Crystal may be planning to go off-book in order to develop the Shitennou better than the manga did. That break from the source, along with some slightly improved animation, makes for a pretty solid episode.

Usagi, Ami, and Rei take a break from searching for new comrades in order to attend a fancy dance party. The goal isn’t entertainment (for Ami and Rei at least), but to investigate the royal guest of honor and the mysterious treasure she has. Though Princess D doesn’t turn out to possess the Silver Crystal of the princess they’re looking for, they end up fighting to protect her just the same.

After every episode of Crystal, I consult the corresponding manga chapter to see what changes have been made, if any. “Masquerade Dance Party” mostly sticks to the original plot, but there are a few added or altered scenes. Rei’s haughty displeasure at being a Senshi is toned down, and her scene with Ami at the arcade is lengthened. It’s a fantastic moment between the two new recruits, as Ami bonds with the somewhat awkward Rei. It serves another reminder that both girls were lonely before they met Usagi. Their ascension to Senshi status has actually allowed them to lead a more social life.

The most significant change in the plot is Jadeite’s survival and the introduction of all four Shitennou. This change most likely indicates a strengthening of characterization for Jadeite, Nephrite, Zoicite, and Kunzite.  Their connection to the Senshi and Tuxedo Mask is significant in the manga, but oddly, they don’t last very long. Crystal may be planning to reconcile their manga and original anime counterparts. I like the change, personally. They’re interesting characters, especially in the original anime, and it will be nice to see them given more time to show their personalities.

“Masquerade Dance Party” focuses on Usagi and Tuxedo Mask more than it has before. Their romance really takes off here, as they share an intimate dance. The moments between the two give off a lovely air of mystery and fantasy that feels nostalgic for the magical girl anime of the 90’s. Tuxedo Mask kissing a sleeping Usagi is a little skeevy, but the writing team made the right choice in omitting her accidental drunkenness. 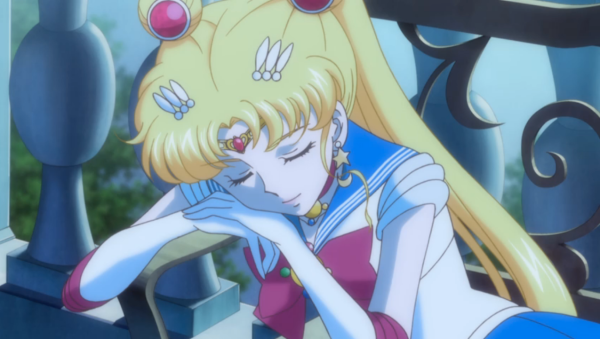 The animation quality is still subpar, but it isn’t quite as bad in “Masquerade Dance Party” as it is in the previous two episodes. The characters look on-model in most of their close ups, though their profile and far-away shots still need some serious work. There are still lots of annoying aspects, like Luna’s constantly morphing cat body, and the inconsistency of the characters’ eye sizes. Still, at this point, I’ll take what I can get.

Despite the consistently low quality of the animation, there is at least some degree of care put into the costume designs. Usagi’s new tiara is gorgeous, and the dresses that Ami and Rei wear to the party are updated for a more modern look.

Ultimately, this episode is an improvement to the series. I doubt it’ll ever reach an animation quality that I’m happy with, but I am pleased that the writing team is evidently not afraid to take liberties in order to weave a deeper story.

Next episode will introduce my girl, Jupes. It’s the episode I’ve been waiting for, and against my better judgement, I have high hopes for it. It will air September 6th.

Images are copyright of Naoko Takeuchi, Toei Animation, and Kodansha