Zankyou no Terror has been adhering to a kind of formula since it’s first episode. It generally begins with the planting of a bomb and ends with the police either succeeding or failing to stop that bomb in time. This episode, however, shook up that concept with Sphinx being the ones attempting to stop their own bomb. With a new character entering the playing field, and some new outlook on Sphinx’s goals, Zankyou no Terror is changing course.

“Hide and Seek” begins normally enough (for this show, at least) with Nine and Twelve assembling a fire-extinguisher bomb that they later place in a train car. They release a riddle video, except that they purposely make it an easy riddle to solve. It’s when they discuss their motivation for that decision that some interesting aspects of their goals come to light. Nine and Twelve plant the bomb in a packed train car with the full expectation that the police will remove it well before it goes off. When they don’t hear anything from the news or a statement from Shibasaki, they grow nervous. Nine and Twelve don’t have any interest in becoming mass murderers. In fact, when it becomes clear that no one is coming to disarm the bomb, they risk their lives and freedom to go remove it themselves. The cold and callous Nine even goes out of his way to rescue an innocent when the bomb actually does go off. 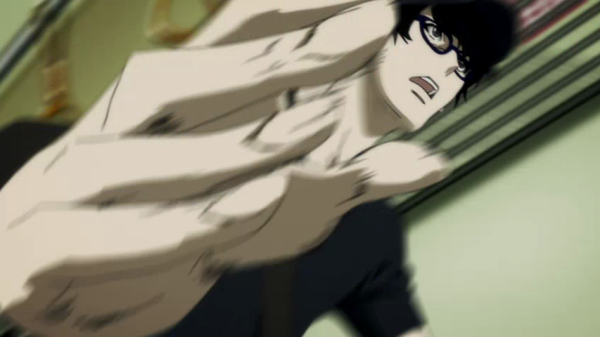 “Sure we put this highly explosive bomb on this packed train car, but it’s not like we wanted anyone to actually die!”

It completely changes how I’ve been looking at Sphinx up until now. It never occurred to me that a pair of seemingly sociopathic bombers would care about the casualties that go along with their acts of terror. For all their posturing, they really do care about the lives at stake. It’s puzzling to me why they wouldn’t just lie about the existence of a bomb if they were worried about things going wrong, but perhaps they just didn’t expect any interference.

Interference comes in the form of Five, the grown up white haired girl from Nine and Twelve’s flashbacks. Five is an enigma, and her goal seems to be to smoke out Nine and Twelve by forcing their hand. Despite Shibasaki’s easy solving of the riddle, Five and her group of foreign special forces refrain from disarming the bomb. It’s a dangerous ploy, but Five knows that Nine and Twelve won’t allow that particular bomb to blow. She’s a risk taker, and she already displays some of the same traits as her fellow childhood captives. She knows that Nine and Twelve are the culprits. It’s only a matter of time before they meet face to face.

The hair game is strong with this one.

Shibasaki uncovers some of Sphinx’s goals himself when he realizes that all of the targeted buildings are run or owned by politicians and leaders who are involved with something called the Rising Peace Academy. It’s most likely the name of the institution that Nine, Twelve, and Five were kept in, which means that Sphinx may be trying to expose those people for their unethical behavior. Nine and Twelve seem to be aware that their plan is going to be their swan song. That appears to be Nine’s true motivation for not wanting Lisa to stay with them. He doesn’t want her to be a casualty in the heat they’re bringing down on themselves.

Lisa spends most of this episode fighting a fever, but she does attempt to ingratiate herself to Nine and Twelve by cooking for them. The food turns out to be terrible, but Nine and Twelve reminisce on their tasteless institutional food and agree that a bad taste is better than none. Poor Lisa is forever kept in the dark, and her treatment at the hands of Sphinx is only marginally better than what she received before. I’m growing impatient for her to actually do something. Her plight is truly heartbreaking, but I’d like for her to start building herself up sooner than later. As of now, she still feels somewhat inconsequential to the plot, but I trust in the quality of this show enough to know that she’s important.

Things are going to be different from now on, with Sphinx’s identities being known to Five, who could end up being an even bigger threat to their operation than Shibasaki. Now that we know that murder and mayhem isn’t what Sphinx is trying to accomplish, the mystery of their motivation becomes even more intriguing.