The Walking Dead broke its string of character driven episodes to prepare for next week’s action-packed mid-season finale. The various groups of people don’t all benefit from the shifting focus, but “Crossed” does a decent job of setting up the confrontation of next week.

Rick, Daryl, Tyreese, Sasha, and Noah’s rescue mission is the most prominent storyline. Originally planning to break into Grady Memorial Hospital and shoot up the place, Rick is convinced by Tyreese and Daryl to take a couple police officers hostage and use them to trade Dawn for Beth and Carol. Despite a few near death experiences involving napalmed walkers, the group is able to capture a trio of officers, who seem just as eager to take Dawn down as they are. One officer in particular, Lamson, seems especially cooperative, but he shows his true colors by getting the jump on Sasha and making his escape. So much for the element of surprise, then.

Sasha’s failure to realize that Lamson (first name: Bob) is playing her comes after she finally makes peace with Bob’s death. This whole time, she’s been stewing in guilt for allowing Tyreese to kill Bob for her, never realizing that he chose to take that burden off of her shoulders because he loves her. Over the course of the episode, Tyreese inspires her to hold on to what Bob taught her and to accept help from others, a lesson that backfires on her when she puts it into practice. Officer Lamson gets Sasha hook, line, and sinker with his sob story, putting her in a vulnerable position. It’s unfortunate that her new worldview is so easily betrayed, but I hope it doesn’t force her back into her shell. 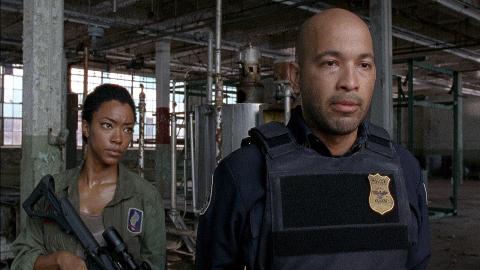 While Rick and co. flounder with their rescue plan, Beth is put in a confusing position. After pointing out how the officers are wasting power that should be used to help the patients, Dawn orders Beth to turn off Carol’s ventilation machine in an apparent show of force. However, once Beth and Dawn are alone, Dawn gives her the key to the drug cabinet and tasks her with saving Carol’s life herself. Perhaps Dawn’s hold on the hospital is beginning to crack. Perhaps, as Dr. Stevens points out, she’s setting Beth up to fail. Either way, Beth has little choice but to shoot Carol up with epinephrine and hope for the best.

Carol remains unconscious for the duration of “Crossed”, but her relationship with Beth is still on display. Beth, who has clearly had enough of everyone’s attitude by this point, takes a moment to revert to her softer side when she tends to Carol. It’s a nice reminder that these two women share a kind of familial bond, especially evident in Season 3. It’s probably too much to hope that both of them will make it out alive, but I would love to see some meaningful interaction between the two, perhaps as they bust their way out of the hospital. 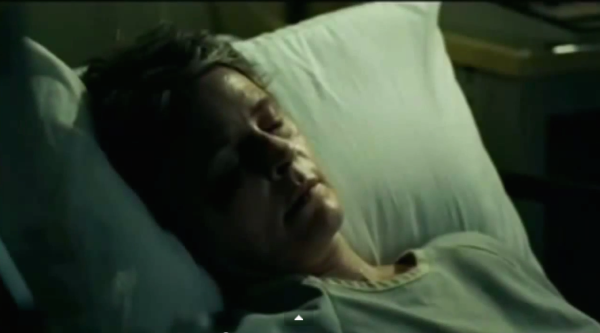 I hope she’s good as using scalpels and lollipops as weapons.

Back on the interstate, Abraham sits in a near-catatonic state while everyone tries to figure out what to do. As far as plot relevance goes, this segment of “Crossed” fails a bit. But Tara, Glenn, and Rosita’s quest for food and water does provide some nice character development. Rosita continues to prove that she’s competent and multi-talented, especially when she pulls out some knowledge about water filtering and fish catching. Tara’s attempts to keep the mood light are goofy, but necessary to keep everyone from falling into despair. Glenn bonds with the two women, proving that he and Maggie have sort of fallen in with a new crowd since the prison fell. While I have no doubt that Glenn and Maggie will always be loyal to Rick, it’s nice to see them cultivate new friendships.

Maggie, Abraham, and Eugene do comparatively little, though Maggie’s tough love nature manages to break Abraham out of his stupor. After having spent an episode deliberating on whether he’d prefer to drop dead or not, Abraham seems to have found some purpose for living, even if that purpose is just to be alive. Eugene’s awakening happens around the same time, perhaps symbolizing the rebirth of their relationship. Most of the group seems to be over Eugene’s deception, though it may still cause trouble when they meet back up with Rick and co. 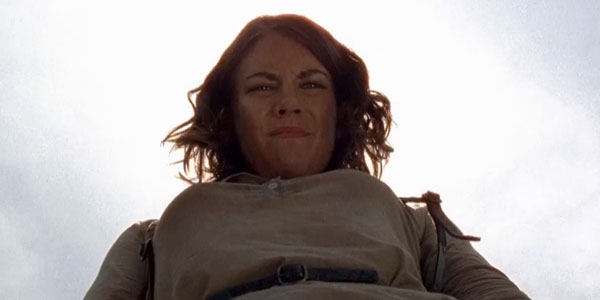 Father Gabriel’s segment is perhaps the least effective, and that’s in part because Father Gabriel has yet to display any redeeming qualities. It’s difficult to tolerate Gabriel’s complaints about his church being defiled when he himself defiled his Church long before the group showed up. His refusal to learn to defend himself and subsequent escape into the walker-infested woods are just comically stupid. He wants to leave the relative safety of the church, guarded by two skilled fighters, to make it on his own in a world infested by flesh eating monsters he can’t bring himself to kill? That logic is flawed, to say the least. Gabriel is likely due for a lesson. There will undoubtedly be a moment in which his hand is forced. But at this point, I don’t have much of a stake in his character. As Carol would say, he’s got to toughen up. And soon.

After several episodes of focus on one group, “Crossed” feels a little jarring with its jumping around. Having every character crammed into an episode doesn’t do any favors for them, but I’m happy to give them a pass this time because of what the episode did accomplish. It’s purpose is to set the stage for what could potentially be a gruesome conflict, and it does that. With everyone on a path to converge once this hospital business is over, I expect The Walking Dead will end its mid-season finale with at least a hint of what the rest of the season has in store.