This week’s Sleepy Hollow restored everything I love about the series. It’s focus on Abbie, Jenny, and Irving is a much-needed respite after several episodes involving Katrina and/or Hawley. While both characters are present, they step back – along with an adorably ill Ichabod – to give the Mills sisters some room.

“Mama” focuses on Abbie and Jenny’s relationship with their mother, whose tumultuous relationship with the demons literally haunting her resulted in her admission to Tarrytown Psychiatric. The Mills sisters have always felt conflicted about the mysterious suicide of their mother – something they viewed as ‘giving up’. When she appears in the room of a suicide victim at Tarrytown, the Mills sisters take the opportunity to learn more about her troubles while solving the case of the Tarrytown suicides.

Do your worst, heartwrenching family backstory!

The Mills family is the highlight of the episode. Abbie and Jenny remember their mother as being unstable and erratic. Jenny, in particular, has a hard time digging into their mother’s past when she so vividly remembers an instance where her mother almost poisoned her with carbon monoxide. But despite all of these childhood instances, Abbie and Jenny love their mother, and they desperately want to believe that she’s not the one behind the suicides at Tarrytown.

They’re right, of course. The ghost of a murderous nurse is behind everything, including the death of Abbie and Jenny’s mother. Through their dealings with the ghost nurse, the sisters begin to make sense of the circumstances of their youth. Their mother’s bizarre behavior stems from her attempts to act as a barrier between the demons and her daughters. The carbon monoxide incident was the work of one of those demons, the revelation of which exonerates her mother in Jenny’s eyes. After years of misunderstanding, the sisters come to realize that their mother did what she did to keep them safe. Rather than giving up, she fought for them until the very end. It’s a very poignant – if characteristically unsubtle – tale, and it allows Abbie and Jenny to put their mother to rest and come closer together.

Sleepy Hollow has fallen into a bit of a rut, which can be partially attributed to Katrina and Hawley, the show’s two weakest characters. While Katrina is attempting to fight her way into relevance, Hawley remains uninteresting. Luckily, both characters took a back seat to the Mills this time around, providing Abbie and Jenny with the collective screen time they deserve. 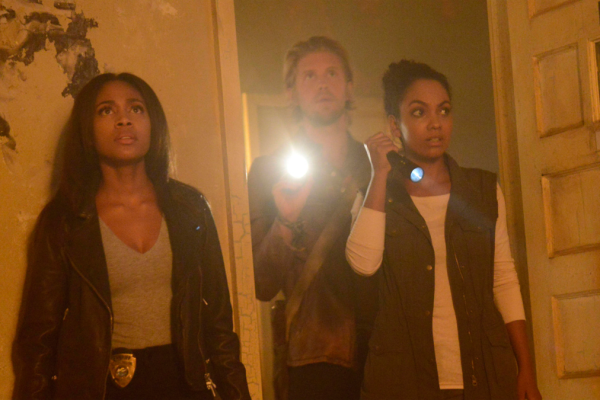 Ichabod is benched for the majority of “Mama” with a nasty cold. His attempts to convince Abbie that he’s well enough to come with are adorable, as is her coddling of him. I’m not one to usually want Ichabod out of the way, but in this case it’s a wise decision. A family story as powerful as this one doesn’t need too many distractions, and I feel that Ichabod may not have had much to do anyway. Giving him a cold is a clever way of keeping him away while also providing the episodic dose of classic Sleepy Hollow humor.

The other big event in “Mama” is Katrina’s struggle with her demonic sort-of baby. The wee baby Moloch seems to have a grip on his would-be mother for a while, but a creepy burn from his little baby claws forces Katrina to take action. She brews a powerful poison, only to find that in the interim, Moloch has grown from a baby to a child. This revelation throws her. After all, killing a demon baby is one thing. Killing a demon child, one that’s fully capable of speaking to you, is another. Katrina clearly knows the boy is Moloch, but her inability to see him for the (darkly cute) monstrosity he is will undoubtedly make it more difficult to carry out her plan.

“I couldn’t find any souls of the eternally damned in the pantry, so I picked this up instead.”

Irving finally escapes Tarrytown in “Mama”. After episodes of being limited in his involvement, Irving finally has a chance to join back up with the gang. I’m willing to bet his reemergence into the story proper has something to do with his demonic corruption. He may have control over himself now, but that may not be the case soon enough. Either way, I’m happy that Irving’s back. He deserves a chance to fight for his fate with everyone else. Plus, he’s a fun character.

Overall, “Mama” feels like a return to the Sleepy Hollow of yore, before the days of Hawley, and Henry masterminding every plot. This show is best when it plays to its strengths, and the relationship between Abbie and Jenny is certainly among those strengths. I just hope they can keep this up for the rest of the season.