This week’s Sleepy Hollow delves into the creepy, unfortunate world of mystical pregnancies. Does it manage to subvert this misogynist trope? Not really. While “Deliverance” does finally bring the underused Katrina into the modern world, it immediately sticks her with a horrifying demon pregnancy that drags down the rest of the episode.

“Deliverance” starts things off with a rant about voter apathy courtesy of Ichabod. He waxes poetic about the importance placed of voting day back in his time period, but Abbie purposefully shuts him down with a reminder that she wouldn’t have been able to vote as a black woman. Humbled, Ichabod quells the nostalgic fire in his belly long enough to engage in some amusing voting antics. 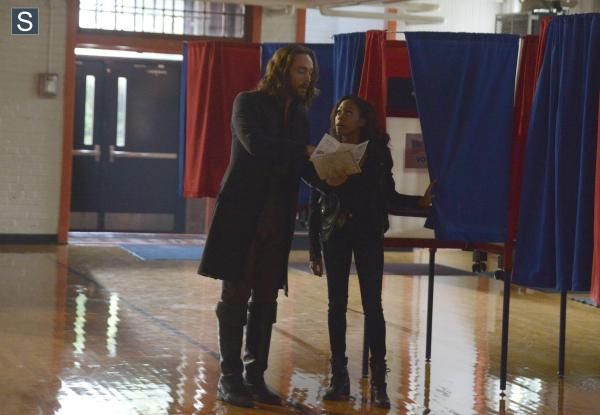 “Hey wow, yeah. It must have been really nice to vote…and y’know, not be a slave.”

Just as Ichabod and Abbie finish up their civic duties, Abbie catches wind of a redheaded Jane Doe dressed in colonial garb at the hospital. Seeing as how the only other vintage dress-wearing redhead they know tragically died two episodes ago (Caroline, gone too soon), they quickly deduce that it must be Katrina and rush over to see her.

Katrina, having escaped from Henry’s forces with the help of Abraham (thanks, but you’re still a terrible person), is in bad shape. She’s been poisoned by Henry’s Jincan spider and, as is soon revealed, pregnant with a demon.

Once the pregnancy is revealed, the narrative takes a nosedive. First, there’s the mind-blowing creepiness of Henry indirectly impregnating his mother. Then, there’s the fact that Ichabod immediately jumps to the conclusion that the demon baby must be Abraham’s. Because obviously, the most logical explanation is that his wife hooked up with her headless, undead, evil ex-boyfriend. And if none of that is bad enough, Katrina tries to convince Ichabod and Abbie that Henry isn’t all bad, despite the fact that the evidence of his loyalties is trying to claw its way out of her stomach. Ichabod jumps on board the “Save Henry” bandwagon, while Abbie slams her forehead into the desk. Not really, but she’s thinking it.

From then on, Katrina is effectively benched. She can’t magic herself out of this situation, not that she ever has much of a chance to use her powers. She’s relegated to a feeble, screaming mess, a vessel for both the demon baby (soon revealed to be Moloch himself) and this ridiculous plot tumor. 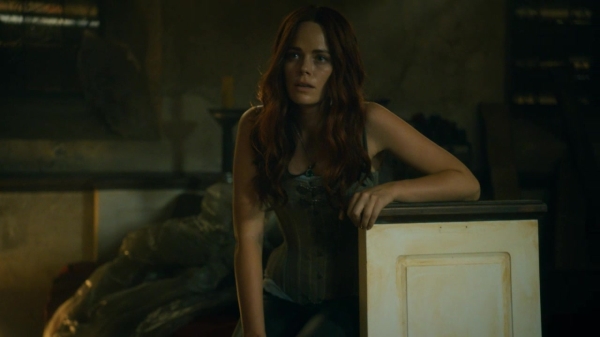 “Maybe next time I could, like, do some rad magic? Kill a demon? Something, anything other than this?”

While Abbie looks after Katrina (I’m really glad they’re presented as a united front), Ichabod simply goes and asks Henry to un-impregnate his mom. Henry, predictably, says no. There’s a moment of foreshadowing at what could be Henry’s heel-face-turn, but at this point I think his sins are too numerous for forgiveness, parental love aside.

“Deliverance”‘s high point comes when Abbie enlists Sheriff Reyes to help her and Ichabod obtain the life-saving McGuffin. Reyes, ever the skeptic, won’t be won over by tales of the apocalypse, so Abbie frames the Hessian cult in possession of the item as a gang with a gigantic stash of guns. The trick works, and Reyes leads a task force to take out the Hessians while Abbie and Ichabod steal the item. Reyes, now a bit more respectful to Abbie, seems to be solidly on the side of good. While she can’t be as deep in the know as Captain Irving (little seen, as is the norm this season), Reyes can do her part to save the world while running on half-truths. I think Sleepy Hollow has set her relationship with Team Witness up to be a fun dynamic, and I can’t see how they spin their dilemmas the next time they need her.

Bottom line, Katrina is saved in the nick of time, though only after enduring what must be the most agonizing, traumatizing event of her life. Poor Katrina is then dismissed from the rest of the episode, while Abbie and Ichabod give each other a celebratory fist-bump. Yay, my wife wasn’t forced to give birth to the harbinger of the apocalypse? 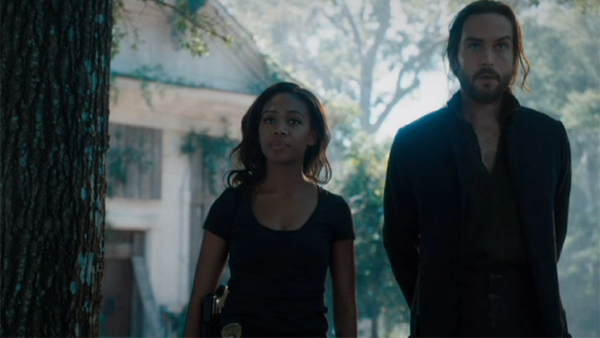 “If we’re going for a beer after this, we better bring one back for Katrina.”

The thing that incenses me so much about the ‘mystical pregnancy’ trope is that it’s a rape analogue. Katrina is forced by her own son to bear a demonic child that would have killed her had it been born. She not only has no agency in the matter, but she’s essentially being punished by Henry for her perceived sins. She suffered both physical and mental trauma, not that we’ll ever see the repercussions of the event. And this is all made worse by the fact that Katrina is arguably the weakest link on the show (maybe less so than Hawley). This is the best the writers could come up with to include her in the goings on. I’d love to see Katrina play a bigger part in the story, but not like this. This is messed up.

“Deliverance” has it’s instances of cuteness (Katrina and the radio), and even a few plot developing moments. But the elements we’re meant to take away from the episode is overshadowed by a gross, upsetting plot that takes advantage of an already undeveloped character. Add to that the fact that Irving only makes a minor appearance and Jenny is conspicuously absent and you have an episode that should have been rethought.