Let it never be said that Rick Grimes isn’t a man of his word. After a horrifying conclusion to last week’s episode, the nightmare continues as Rick’s group is hunted by Gareth and the other cannibals. But in the zombie apocalypse, the tables can turn in an instant. Dark and brutal, “Four Walls and a Roof” establishes Rick’s new uncompromising outlook on life while also setting into motion the post-cannibal plotlines.

Last week, Bob woke up to find Gareth and his band of cannibals munching on his leg. This week, Gareth continues his self-righteous monologue, insisting that he’s just trying to survive even as he happily crams Bob’s leg meat in his mouth. The scene is accented with a trapped group of walkers gnashing nearby, making for a completely unsubtle parallel.

Unfortunately for Gareth and his gang, the beginning of the end is kickstarted by Bob’s revelation that he’s been bit. For someone as emotionally stable as Bob, his hysterical laughter at the cannibal’s consumption of ‘tainted meat’ is both chilling and amusing. The cannibals flip their lids, some even vomiting up the contents of their stomach. 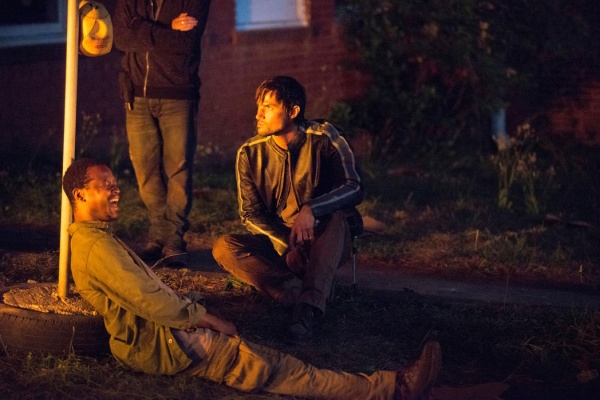 Ultimately we never get to find out whether eating tainted meat has any negative side-effects, but it’s an interesting idea to contemplate. Does cooking the virus out of the meat neutralize it’s effects? Does the virus have to enter the bloodstream to be effective? And if everyone already has it, would it have any effect at all? Even though Bob’s ‘tainted meat’ doesn’t ever seem to incapacitate the cannibals, it’s a fun scene regardless, and one that foreshadows the end of the line for Gareth and his gang.

In order to rattle Rick’s group (and rustle up some healthier pickings), the cannibals dump Bob’s unconscious body on their doorstep. The group, already worried about Daryl and Carol’s sudden disappearance, begin to formulate a plan to retaliate. Abraham and Rick clash over their next move, with Abraham wanting to leave immediately and Rick wanting to finish off the cannibals and wait for Daryl and Carol to return. They eventually decide that Abraham, Eugene and Rosita can go on ahead to DC with Maggie, Glenn, and Tara after they’ve taken care of the cannibals.

Having come to a compromise, Rick and most of the group set out to find Gareth, leaving Tyreese, Rosita, and Carl behind to protect Eugene, Bob, Judith, and Father Gabriel. Naturally, Gareth and the cannibals storm the church as soon as they leave. In a truly terrifying sequence, Gareth tries to verbally smoke out the people at the church, even attempting to play on Father Gabriel’s cowardly nature by insisting he can go free if he gives up the others. There are a lot of classic horror and thriller tropes applied here, especially when Judith’s cries give their position away. Just as Gareth is about to bust down the door, Rick and co. come in triumphantly and lay waste to the group.

“If you let me go, I promise I’ll only cannibalize people you don’t care about. Deal?”

Rick’s transformation into full-scale apocalypse survivor becomes abundantly clear in his confrontation with Gareth. He doesn’t listen to compromise, he doesn’t show mercy, and when he hacks at Gareth with his red-handled machete, he shows a chilling resolve to follow through with his promises no matter how brutal they are. As the more hopeful members of the group look on in horror, Michonne, Abraham, and a righteously vengeful Sasha follow suit in their dealings with their cannibalistic opponents.

The group’s descent into darkness is perfectly represented by the fateful return of Michonne’s katana. Having previously mentioned that she’s happier without it, Michonne picks up her sword with both dread and acceptance. She can’t survive without violence in this world. Whether she can reconcile the need to kill with a more emotional lifestyle remains to be seen.

Bob’s death is a complete tonal shift from the massacre of the cannibals. Surrounded by his friends and watched over by Sasha, Bob maintains his positive attitude as he succumbs to the disease. Bob’s optimism will be greatly missed, and I hope his influence stays with Rick and the others. Their dark turn is certainly effective in dealing with their enemies, but it’s no way to live. I’m relieved that they allow Bob to retain his outlook even after what he went through. I worried that his experiences would knock him down a peg, and I’m glad he stays himself to the end. The Walking Dead is a dark and disturbing show, but it would become unbearably bleak without at least a little positivity.

Glenn, Maggie, and Tara keep good on their word to leave with Abraham’s group to DC, and they depart while Rick and the others stay behind to wait for Daryl and Carol. I think it’s incredibly foolish to split the group up again, but Abraham at least has the decency to leave behind a map of their route with a written apology for good measure. I fully expect trouble to be ahead for at least one of the two parties, but I hope they manage to reunite a bit more easily this time around. 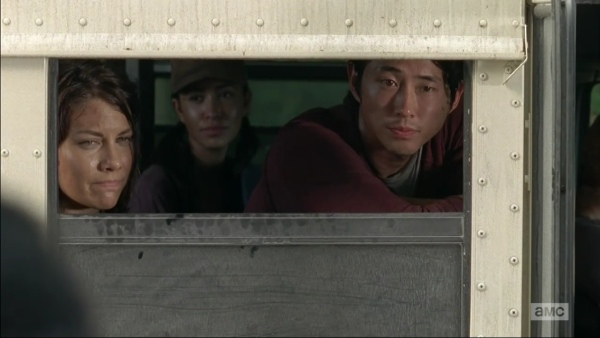 “If you see my sister…tell her she’s on her own, GLENN AND MAGGIE OUT!”

Absent for most of the episode, Daryl shows up without Carol, but with an as-of-yet-unseen person in tow. As much as I would love it to be Beth (who would just miss her sister), I highly doubt that it is. More likely, it’s someone associated with her storyline, which will hopefully prompt everyone else to begin a search for her. It’s the least they can do after refusing to acknowledge her existence once again. I fully understand that Maggie and the others probably assume that Beth is dead, but even one line of rationalization for their lack of interest in finding her would be better than not mentioning her at all. This season of The Walking Dead is shaping its characters up to be in a pretty emotionally closed off place (their reaction to Gabriel’s terrible backstory is barely more than a shrug), but it’s conspicuous that Rick and the group freak out when Daryl and Carol disappear, but haven’t uttered a word about Beth.

Luckily for us, next week will address Beth’s whereabouts. Whether Rick and the others actually decide to take an aside trip to go get her is one thing, but I’m sure she’ll be reunited with them one way or another, especially if her fate is connected with Carol’s, as I expect it may be. With the cannibal threat dealt with, I imagine the remaining members of the group will want to find them and then tail after Abraham to DC. After all, they’ve got nothing better to do.

One thought on “The Walking Dead Episode Review: 5×03 “Four Walls and a Roof””