This week’s Sleepy Hollow isn’t a paragon of originality, but it’s a solid episode that weaves pretty seamlessly into the overall story. The “magic coin” plot isn’t exactly new, but “The Root of All Evil” does a good job of dealing with some of the baggage carried by the Mills sisters, as well as introduces a new recurring character.

“The Root of All Evil” centers around an ancient Tyrian shekel that draws out the deepest, darkest betrayals in the hearts of it’s beholder. Henry, ever the instigator of evil supernatural plots, places the coin in the hands of a kindly bank teller, who proceeds to shoot up the bank. From that point, Abbie and Ichabod race against time to try and remove the coin from circulation before it wreaks more havoc.

Unfortunately, Jenny gets a hold of the coin before Abbie and Ichabod can safely remove it, which brings out her hatred of Sheriff Reyes. Reyes, as we learn early in the episode, is the one who put Abbie and Jenny’s mother in Tarrytown Psych, where she later committed suicide. Jenny’s resentment of Reyes prompts her – under the coin’s influence – to go after Reyes with a rifle, and Abbie and Ichabod only just manage to stop her.

The coin storyline is relatively stand-alone, though it does have it’s connections to Ichabod’s personal history. Ichabod reveals that the coin’s influence is what turned his former friend Benedict Arnold traitor (because of course it did), and that it could potentially be one of the 30 pieces of silver paid to Judas to betray Jesus. Despite the coin’s somewhat isolated effect, it does a good job of furthering the mystery of the vague ancient evil that Abbie and Ichabod face. It’s both ridiculous and intriguing to think that the pieces of silver could be behind the major betrayals of history.

At this point, I’m no longer surprised.

The coin also connects Ichabod and Abbie to Nick Hawley, a roguish treasure hunter. As a white, handsome history buff, Hawley is set up as Ichabod’s sitcom nemesis. He’s a source of cartoonish irritation for Ichabod, a fact he openly expresses when the two are forced to cooperate in obtaining a container for the coin. Hawley’s allegiances are shady, but his motives are mostly self-serving, as opposed to evil. While it’s possible that he could betray Abbie and Ichabod to the highest bidder at some point, his excuse for coming back to the group after he could have made off with the coin hints that he’s interested in joining the adventure.

John Noble remains a delight as Henry Parish. His affability makes his evil ways that much more intimidating, and his superficially pleasant verbal trouncing of Ichabod in the police station is on point. Henry is so chilly, with just enough emotional complexity to make him sympathetic. Katrina, still spying on the Horseman (who is playing so hard into her hands that she has him making her gourmet cheese platters), is confident in her ability to get through to Henry and force him to examine his actions and his feelings for her and Ichabod. Henry proves to be at least somewhat effected when he burns the frame of the bed he was born in. It’s nice to see that Katrina has a few goals of her own in mind. I hope that means she’ll be doing more in the future. 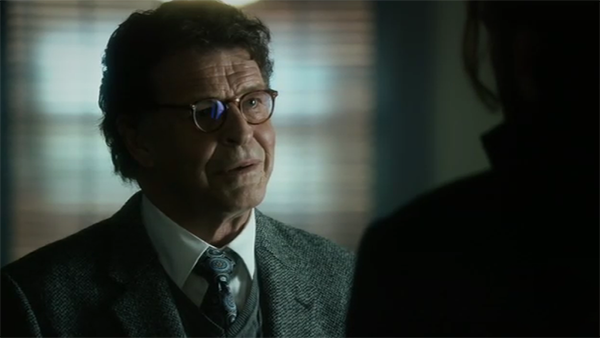 “Your parenting skills are bad, and you should feel bad.”

The emotional center of the episode lies with Abbie and Jenny, who don’t quite see eye to eye on Reyes’ role in their mother’s suicide. Despite their argument over Reyes’ motives early on, Abbie reaffirms her loyalty to Jenny when she talks her down from shooting Reyes. Abbie and Jenny have one of the most poignant relationships on television, and I continue to admire the fact that they’re still working through their issues with each other. It would have been a complete copout to magically fix their relationship, but Sleepy Hollow is too good a show for that. I only hope that Abbie reveals the demonic origins of her mother’s problems to Jenny right away, lest the secret cause strife between them.

The communication between the character is one of my favorite things about Sleepy Hollow. Discovering that they’ve been barred by Henry from visiting Captain Irving, Ichabod indirectly meets with him in the rec room and immediately informs him of Henry’s true identity. While Irving is skeptical, he seems to be prepared to go along with Ichabod’s suggestion that he remain admitted, thus bringing him satisfyingly up to speed. Other shows would have everyone keeping vital information to themselves for the sake of drama, but Sleepy Hollow has better things to do than orchestrate frustrating miscommunications.

“Thank god you told me that Henry is your evil son. Can you imagine if you had just kept that to yourself this whole time?”

“The Root of All Evil” is a good episode, even if it doesn’t contribute as much to the overall plot as the previous two episodes. Sleepy Hollow has always had a smattering of “monster-of-the-week” type episodes, but they usually manage to weave it into the overall narrative pretty smoothly. After all, when your ultimate villain is The Apocalypse, there’s not a lot you can’t do.