Sleepy Hollow is back after a ridiculous and awesome first season, and it’s brought with it the same sense of silly fun. The first two episodes solve the cliffhanger of last season as well as reestablish the dynamics between Ichabod, Abbie, Jenny, and Katrina. There are new characters, new problems, and a new horseman on the rise, and Sleepy Hollow wastes no time in diving in.

“This is War” solves last season’s predicament concerning Ichabod and Abbie’s imprisonment in a coffin and Purgatory respectively. Stuck there after switching places with Katrina, Abbie has been on the run from Moloch since she arrived. There is a brief interlude in her search for a way out, in which she and Ichabod are both tricked by Henry into believing they escaped a year before. The goal behind Henry’s deception is to glean Ichabod and Abbie’s knowledge of a key that has the power to open the gates of Purgatory, catch-free.

Once free from the illusion, Ichabod escapes his coffin prison by igniting the sulfer he’s buried under. He promptly goes to pick up a captured Jenny, who escapes just in time to meet him by the getaway car. On the way back to town, Ichabod speaks with Abbie in Purgatory via mirror, and makes a plan to find the Purgatory key before Henry does and use it to get her out.

“Oh hey Ichabod, I got this, but thanks for coming.”

Jenny and Ichabod track the key down to a hiding spot marked by Benjamin Franklin, Ichabod’s former teacher (of course he is). Using it, they manage to evade Henry’s henchmen, open the door to Purgatory, and rescue Abbie just in time to prevent Moloch from coming through as well.

Not everything is sunshine and roses though. Katrina is being held captive by the Headless Horseman, who tells her that he wants to be with her forever. Poor, underused Katrina is put in an even more helpless and gross position.

“The Kindred” continues the momentum by having Ichabod make an effort to rescue Katrina from the Horseman. The Horseman evidently plans to behead Katrina and keep her as his undead bride (which, if you think about it, has all sorts of gross implications about her overall value to him) Despite his desire to rush in and swashbuckle his way to her, Ichabod is made to sit back and think of a plan. 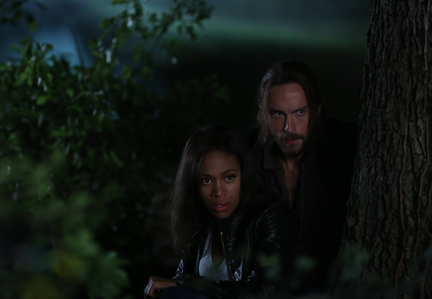 “Do you want to end up like the heroes on all those other supernatural dramas? No. We’re actually going to form a plan.”

Meanwhile, Abbie meets an incarcerated Irving’s replacement, Captain Reyes, a no-nonsense former Border Patrol officer. Reyes is kind, but could be a potential adversary to Abbie if her skepticism keeps her blind to the situation at hand (or if she turns out to be evil). After running into a weapon-laden Jenny in the archives, Reyes arrests her, effectively benching Jenny for an as of yet unknown amount of time. These guys really need to find a new base of operations.

Ichabod and Abbie discover a way to fight the Horseman on equal terms. They prepare to raise the Kindred, a Frankenstein monster created by Benjamin Franklin and Katrina’s coven to combat the Four Horsemen. The finishing touch for this adventure in necromancy is the Horseman’s head, which is hilariously secured in a deposit box at a bank. The two take their undead friend and pit him against the Horseman, and later War, while Ichabod attempts to get Katrina out. However Katrina, who plays the Horseman’s feelings to delay her beheading, elects to stay on as a spy. Ichabod and Abbie leave her to her prison.

“Let me be a spy. Or something. Anything. Let me do anything.”

Captain Irving manages to get himself relocated from prison to Tarrytown Psychiatric, but accidentally signs some kind of blood contract, given to him by his “lawyer”, Henry.

“This is War” and “The Kindred” bring the classic Sleepy Hollow humor (Ichabod’s griping about Benjamin Franklin and the wedding industry), and silliness (only this show would pull off a Headless Horseman shirtless scene) as well as immediately moves to advance the plot. Moloch’s uprising is barreling forward despite the setbacks they cause him, and with a new Horseman at his disposal, he’s more powerful than ever.

The friendship between Ichabod and Abbie is sweetly rekindled, and their chemistry (platonic or otherwise) remains as strong as ever. Jenny and Abbie show off their badass chops, though Katrina is once again relegated to the role of damsel. Perhaps her tenure as spy will give her more to do, though I’m not sure how to feel about her “honey trap” shtick.

Perhaps the most intriguing new addition is the Kindred itself. I hope it makes a repeat appearance, especially since I like the idea of it being their team pet, or at least their secret weapon.

Do you think it does “Puttin’ on the Ritz”?

My one major gripe with Season 2 so far is that it doesn’t seem to trust the viewers to connect the dots themselves. Every reference to a previous event is accompanied by a brief flashback, and while that can be helpful to refresh memories, it does feel a little like hand-holding. Hopefully the writers will lay off further into the season.

I’ll be reviewing Sleepy Hollow every week. See you next time.

Images are copyright of Fox.